Two months have passed since North Korea shut down its borders to prevent the spread of the novel coronavirus (COVID-19) into the country from China.

Sources inside the country have reported on a near standstill in economic activity, spikes in commodity prices, and school shutdowns.

Daily NK attempted to capture what life is really like in North Korea under these circumstances via sources based in Hyesan, Ryanggang Province, which is located on the Sino-North Korean border.

In the photo below, two homeless adults with tattered sleeves and dust on their midsections are roaming through the streets without face masks.

On Sunday, Rodong Sinmun published an article urging North Koreans to wear face masks. The article stressed that those not wearing masks during a “time of crisis” are failing to fulfill the basic duties of a citizen and would be treated as a serious social and political problem.

Photographs taken in the city also suggest that the North Korean government’s attempts to restrict the movements of “vagrants” has not been completely successful. For example, a homeless person is seen walking the streets of Hyesan in the photo below.

The streets of Hyesan, where these individuals were photographed, are also dull and empty. Presumably, this is because of the “social distancing” that North Korean authorities have advised their citizens to follow and the lack of economic activity due to the shutdown of the Sino-North Korean border.

Although it is difficult to make a direct comparison between the two sets of photos, given they were taken in different locations and during different times of year, the streets depicted in Kang’s photographs (one is shown below) are lively and filled with market vendors and shoppers.

One of the photos sent by one of our stringers in Hyesan shows slogans printed on computer printer paper stuck up on a doorway. All the slogans affixed to the door are printed in different fonts, which suggests that different local organizations distributed them.

The slogan at the very top reads, “Let’s Thoroughly Block the Spread of the Coronavirus.” This particular slogan first appeared in the pages of Rodong Sinmun on Jan. 26 in an article written by a high-level public health official, and again in a Korean Central Television (KCTV) broadcast on Jan. 31.

Since Feb. 1, the Rodong Sinmun has published almost daily dispatches on how the country is managing disease control efforts.

Another slogan affixed to the door warns North Koreans about “burning gas.” Many North Koreans still burn coal briquettes (yontan) to heat their homes. Carelessness or ignorance about how to safely use this heat source have led to countless carbon monoxide poisoning-induced deaths.

The last slogan on the door calls on North Koreans to “boil drinking water.”

North Korea still suffers from poor waterworks infrastructure, which means the few areas of the country have clean supplies of tap water.

UNICEF, in a report published in 2017, stated that “six out of 10 people in the country (over 9.7 million people) did not have safely managed drinking water. Overall, 23.5 per cent of the population drank water from contaminated sources.”

North Koreans must typically draw water from wells or creeks, store the water in tanks, and boil it when required for cooking or washing. 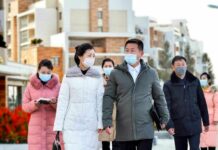