Production at North Korea’s largest fertilizer plant, the Hungnam Fertilizer Complex, has halted and its workers have been sent to work on other projects, Daily NK has learned.

“Six months have passed since the Hungnam Fertilizer Complex stopped operations,” a source based in South Hamgyong Province told Daily NK on Friday. “Fertilizer production had been decreasing for several years, due to the lack of electricity and acquiring raw materials. Production stopped entirety in spring.”

Daily NK reported in February of this year that production at the complex was gradually falling.

UN sanctions and the ensuing ban on the import of oil, a key ingredient in chemical fertilizers, may have also been a factor in the factory’s closure, the source added.

North Korea’s fertilizer production is currently meeting only one third of the country’s total demand. North Korea uses a total of 1.55 million tons of chemical fertilizer per year but only produces about 500,000 tons, Daily NK sources said.

North Korea relies predominantly on imported fertilizer. Farm workers reportedly prefer the fertilizer from the Hungnam Fertilizer Complex because it is superior in quality than fertilizer imported from China. The military was given priority for fertilizer produced at the complex.

The shortage of fertilizer is adversely affecting agricultural production, particularly given that this year’s production of fertilizer has fallen far short of demand, Daily NK sources said.

“Collective farms have had an overall poorer harvest this year compared to the last,” said one of the sources. “Farmers are blaming the lack of fertilizer for the poor harvest.”

The import of a wide range of machinery and raw materials is banned under UN sanctions, however. Some North Korea observers argue that the ban on these imports only make it harder for North Korea to improve its agricultural production by itself.

WORKERS REASSIGNED TO OTHER PROJECTS

Daily NK sources also reported that some 70% of the workers at the Hungnam Fertilizer Complex were sent to construction sites throughout the country after the complex shutdown. These construction sites included the Wonsan-Kalma Coastal Tourist Zone, the Hamhung-Wonsan highway, and the Tanchon Power Plant. Some workers were even sent to the fields to farm.

“The Hungnam Fertilizer Complex employed more than 10,000 workers. Lots of workers complained after they were sent to do other work following the shutdown,” one of the sources told Daily NK. “Many people wanted to work at the complex because it gave employees a stable supply of rations. That’s all in the past now.” 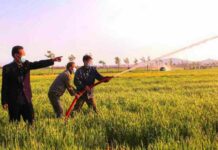