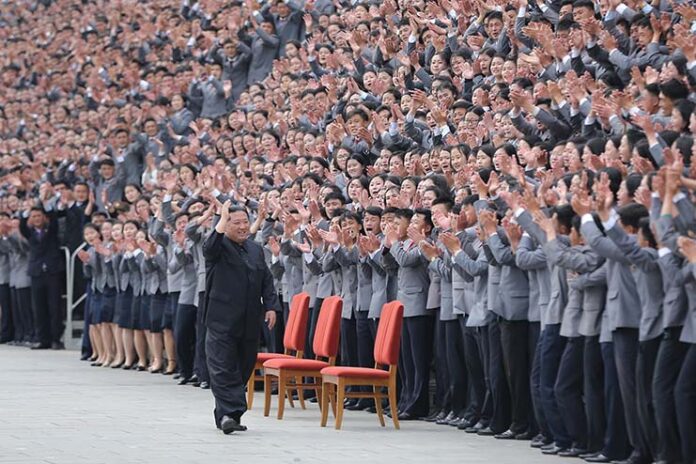 North Korean authorities have determined that an individual infected with COVID-19 was at a recent event attended by leader Kim Jong Un, leading the country to announce the country’s outbreak, Daily NK has learned.

A Daily NK source in Pyongyang told Daily NK on Friday that the government received reports that a university student infected with COVID-19 attended an event with the North Korean leader. This spurred the government to action without hiding the facts, he added.

On May 1, Kim Jong Un posed for a commemorative photo with university students and young workers who contributed to the success of the military parade to mark the 90th anniversary of the North Korean military’s founding, according to state-run media.

The source said one of the university students who attended the event was infected with COVID-19, and most importantly, the authorities judged that the student may have been in close contact with Kim. This led the authorities to announce the outbreak and implement measures to respond.

N. Korean authorities judge they can’t hide holes in their quarantine efforts at an event attended by Kim

Daily NK’s source said that North Korean authorities are taking their failure to weed out an infected individual from an event attended by Kim very seriously.

Nobody can overlook the matter as it directly pertains to the personal safety of the country’s supreme leader, he added.

This suggests that the authorities made relevant facts surrounding the case public as part of efforts to thoroughly question who was responsible, determine causes, and craft measures to prevent a reoccurence.

The government’s decision to go public with the outbreak appears to have also been driven by concern that failing to provide an explanation while putting the entire nation under lockdown could further aggravate already seething public opinion.

Indeed, North Koreans have grumbled considerably about regional lockdowns in the past, complaining that they have endangered their livelihoods. Given this experience, North Korean authorities would have been pressed to offer an explanation while launching an intense nationwide lockdown.

North Korean authorities apparently believed that having the party leadership officially acknowledge the COVID-19 outbreak would prevent public disaffection and help the authorities effectively carry out their disease control policies.

Furthermore, Kim Jong Un’s first public appearance wearing a mask since the start of the pandemic appears to have been aimed at conveying to the public the seriousness of the situation.

Last Thursday, state-run KCNA reported that genetic analysis of samples taken from individuals of a “certain group” in Pyongyang suffering from fevers on May 8 showed the BA.2 sub variant of the Omicron virus.

The report did not specify the group infected, but Daily NK’s source in Pyongyang said that the first mass outbreak after the military parade was at the Pyongyang Jang Chol Gu University of Commerce.

According to him, around 10 students at the university were the first to be confirmed as sick. He added that around 20 members of an inminban (people’s unit) in Pyongyang’s Central District who were involved in the military parade were infected, too.

The source further reported that university students living in or around Pyongyang who took a photo with Kim Jong Un received five to seven days of vacation as a reward, traveling to South Pyongan Province, North Pyongan Province, South Hwanghae Province, North Hwanghae Province and Nampo. He said the authorities are certain that these individuals, who were in close contact with the infected, spread the virus nationwide during their travels.

In fact, KCNA reported on Friday that from April, fever cases had spiked nationwide in a short time to about 350,000 people, about 162,200 of whom fully recovered. It also said about 187,000 people were in isolation and receiving treatment, while six people had died, including one confirmed case of Omicron.

Confirmed COVID-19 cases along with their families sent to temporary facility; all students and staff at Pyongyang Jang Chol Gu University of Commerce being tested

North Korea is isolating the infected and their families and testing all students at the Pyongyang Jang Chol Gu University of Commerce, Daily NK’s Pyongyang-based source further reported.

He explained that confirmed cases were transported to a temporary isolation facility in Pyongyang, while all their family members have been ordered to isolate themselves in their homes.

Previously, North Korean authorities had refrained from establishing isolation facilities in Pyongyang under the policy that there must be no facilities related to COVID-19 in the “capital of the revolution.” However, it appears the authorities have placed a new isolation facility in Pyongyang due to the latest outbreak. The facility is likely on the outskirts of the city rather than in its downtown area.

The source said the authorities have deployed medical testing vehicles so that all members of the group from which the confirmed cases emerged are tested for the virus. He said the authorities planned to finish the testing by May 14 and issue specific administrative orders in accordance with North Korea’s quarantine law.

The source further explained that buildings and everything inside were disinfected with liquid sprayers, and that the authorities ordered that the communal building where the confirmed cases emerged be subjected to 10 days of intensive steralizations.

Meanwhile, the student with COVID-19 who attended the May 1 event attended by Kim Jong Un was infected by a relative who had recently visited China.

The source said a nephew of a trading company guidance official took part in the military parade as he is a student at the Pyongyang Jang Chol Gu University of Commerce. For his part, the guidance official manages the distribution of goods through customs and had recently gone on a short visit to China.

In short, the infected student attended the event with Kim after being infected by his relative.

The Chinese city of Dandong — a major hub of China-North Korea trade — was put under lockdown on Apr. 25 due to the spread of COVID-19. North Korea suspended freight train service four days later on Apr. 29.

Daily NK’s source in Pyongyang said the trade official was subject to no criticism or legal punishments because he stayed true to party orders to conduct trade only through Sinuiju, and his nephew did not go overseas.