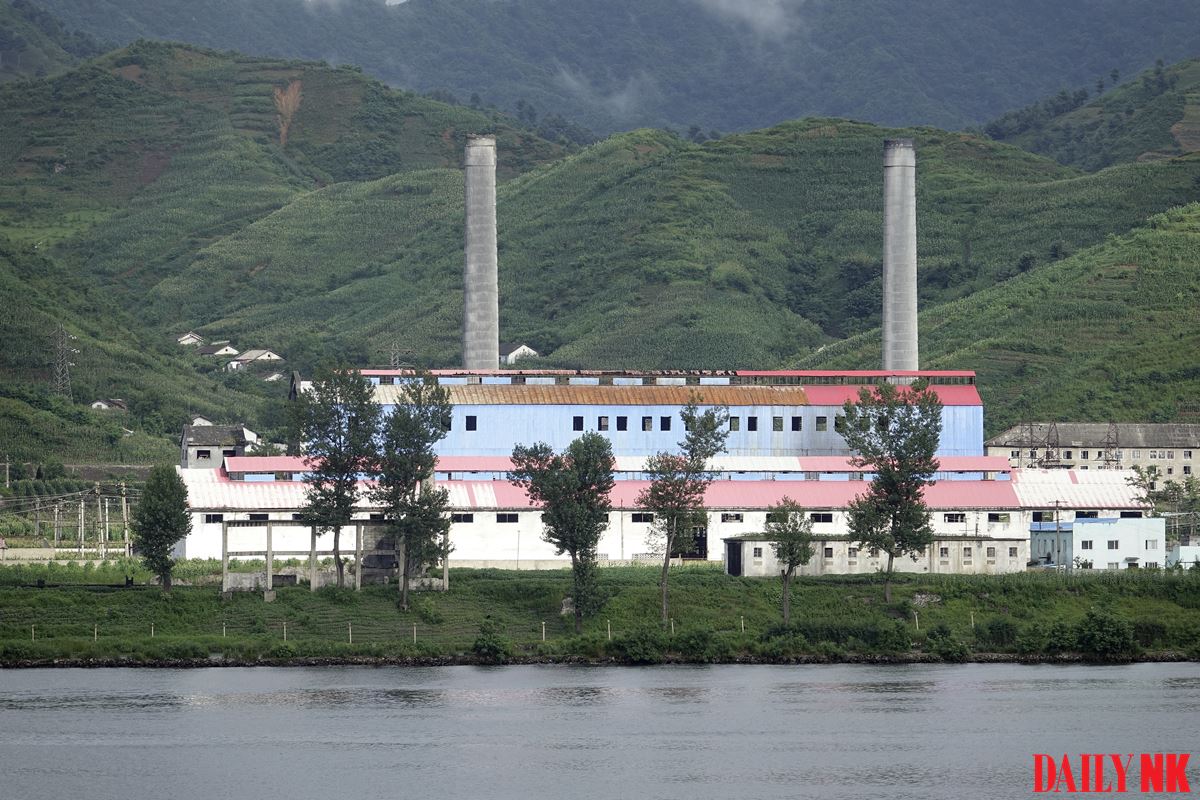 Daily NK traveled to the Sino-North Korea border region in July to investigate whether international sanctions and the heatwave gripping the country are having visible effects on residents.

Looking over the Amnok River from the Chinese city of Dandong into North Korea’s North Pyongan Province, one of the first things that can be noticed in the first set of photos below is that the riverbank is dotted with corn crops rather than trees. The surrounding hills feature a few propaganda signboards, but the general landscape is sparsely forested.

According to a source Daily NK spoke to in the area, the early corn harvest will serve as the primary staple for many North Korean residents this summer but that it’s “been really bad compared to last year.”

Further upstream is Sakju County, North Pyongan Province. The houses in this area are notably run down. Potato and corn plots dot the mountains but the land is mostly barren and without trees. North Korean residents with precariously overloaded bicycles traverse the narrow roads snaking through the plots, while taxis and delivery vehicles navigate narrow paths along the mountain slopes. Residents cautiously fish by the river under the constant watch of the ever-present guard posts, as Chinese tourist vessels meander by.

The water purification facilities in the surrounding industrial region are outdated or retired, with only a few operating at a reduced capacity evidenced by smoke billowing out of a chimney or two. A source in Dandong told Daily NK that the sanctions have further reduced factory operations due to sanctions targeting the country for its nuclear and missile programs. “Consequently,” he said, “most of the workers in this area aren’t getting regular rations or remuneration.”

Below are images of Namyang, North Hamgyong Province, the site of a devastating flood in 2016. New apartments have been constructed in the area, but some older dwellings remain.

“A lot of houses in the city were completed flooded and the water damage was so bad that the only option was to tear them down and rebuild. But as part of the propaganda-driven campaign to show Kim Jong Un’s ‘love for the people,’ they only really focused on rebuilding dwellings next to the river and didn’t pay attention to other areas,” a local source told Daily NK.

These photos were taken on Victory Day, a national holiday in North Korea (National Korean War Veterans Armistice Day in South Korea). The atmosphere was decidedly less rushed. Men were playing volleyball while women could be seen dancing.

Most of the mountains in this area are used as farmland and residents can be seen riding an ox wagon using it to work the land.

Due to the holiday, Wonjong-ri Customs Office was closed as Daily NK’s reporter passed through, likely explaining the lack of vehicles or people in the area. To the left of the bridge in the above photos is the Wonjong-ri International Market, which opened in July as reported by Daily NK.

A separate source in the region said that the market has not been able to produce significant revenue yet due to sanctions which, in theory at least, prevent Chinese tourists from buying seafood products and returning with them to China.

A local North Korean who had been in China on a personal travel visa for three months told Daily NK that life in North Korea had gotten harder recently compared to the last few years.

“There’s plenty of people selling things in the markets but fewer people buying them because most don’t have the money. Those that do have a bit of money give it to cadres so that they can get a visa to China and earn money that way. That’s been the trend for a while now,” he said.

“I really hope things go well with South Korea and we won’t have to worry so much about how to earn a living.”

Ryanggang Province is in the midst of berry-picking season