A source in Yanggang Province told Daily NK on Tuesday that the Central Committee reissued an order on Aug. 9 calling for beefed up controls on streetside commerce. “Following the order from the Central Committee, even the district office chief has begun cracking down on streetside commerce, and fights with locals are breaking out here and there,” he said.

According to the source, a fight between grasshopper merchants and the district office chief broke out in front of a vegetable wholesaler in Hyesan on Sept. 2.

Taking issue with the district office chief’s comment about the country “struggling,” locals reported him to the local task force handling non-socialist and anti-socialist behavior. He was not punished, however, and is reportedly still cracking down on streetside commerce.

The source said with police, inminban heads and now even district office chiefs cracking down on streetside commerce, fights with locals are breaking out every day. “However, nobody upstairs is taking any measures,” he said.

In North Korea, the district office chief directly meets with local residents. They have played the role of middleman between the authorities and local residents, vividly surveying the execution of policy and administration in their jurisdictions and resolving problems in accordance with the authorities intentions.

In fact, the district office chiefs have carried out many duties in the past, including distributing holiday provisions and ration tickets. They have built up an image as “errand boys,” regularly checking in on decorated soldiers, retired officers and persons of merit to resolve difficulties they may face. 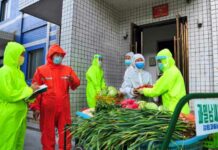 N. Korea compels party members to contribute household medicine and food for those in quarantine

[Photos] What kind of Chinese medicine is being sold in N. Korea to treat COVID-19 symptoms?

[Photos] What kind of Chinese medicine is being sold in N....

Ordinary N. Korean soldiers are suffering due to a shortage of...