A source in South Pyongan Province told Daily NK in a phone call recently that “the authorities ordered the production of snacks and candy made of corn as supplies for the holidays,” adding that “because of this, the price of corn skyrocketed within just a few days.”

North Korea has been supplying holiday gifts such as candy and snacks to children every year before the national holidays, including the birthdays of Kim Il Sung (Apr. 15) and Kim Jong Il (Feb. 16). This year, they supplied gifts on Kim Jong Il’s birthday, which is referred to in the country as the “Day of the Shining Star.”

This year, however, the North Korean authorities have been suffering from financial difficulties due to sanctions and the COVID-19 outbreak.

“As a result, [the authorities] ordered the production of relatively cheap corn-based food products in a desperate attempt to reduce holiday supply costs, which suddenly lowered the markets’ supply of corn,” the source said. The reduced stocks explain the sudden jump in prices, according to the source.

As of Feb. 23, the price of corn in Hyesan, Yanggang Province, was KPW 3,600 per kilogram, the highest price recorded since the currency reform in 2009.

There was a similar price increase in other regions, such as Sinuiji, North Pyongan Province. “Corn had traded in the low range of KPW 2,000 in early February. The price suddenly rose to KPW 3,000 on Feb. 11, the day before the holidays, and remained at a similar level until Feb. 23,” the source said.

Corn is a staple food for North Koreans in difficult economic conditions because it can usually be bought for half the price of rice.

As trade was suspended last year after the border closure due to COVID-19 quarantine measures, market transactions and imports decreased.

With the decline of their purchasing power, more and more people have looked to corn as a replacement for rice, which has led to a gradual increase in corn prices in the past year.

Daily NK has become aware that there has been an increase in complaints among North Koreans about the rise in corn prices.

“More and more people are starving as the price of corn, which you were once able to buy for KPW 2,000, suddenly increased to more than KPW 3,000,” the source said.

However, if the demand for corn has temporarily increased in order to produce supplies for the holidays, there is a likelihood that the price will gradually stabilize over time.

“People everywhere are complaining about the price increase, so [the authorities] may be trying every which way to lower the prices,” the source said, adding that, “We will have to wait and see if the prices will actually decrease again.” 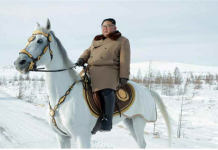 Several boys arrested for stealing scrap metal from the ruins of...