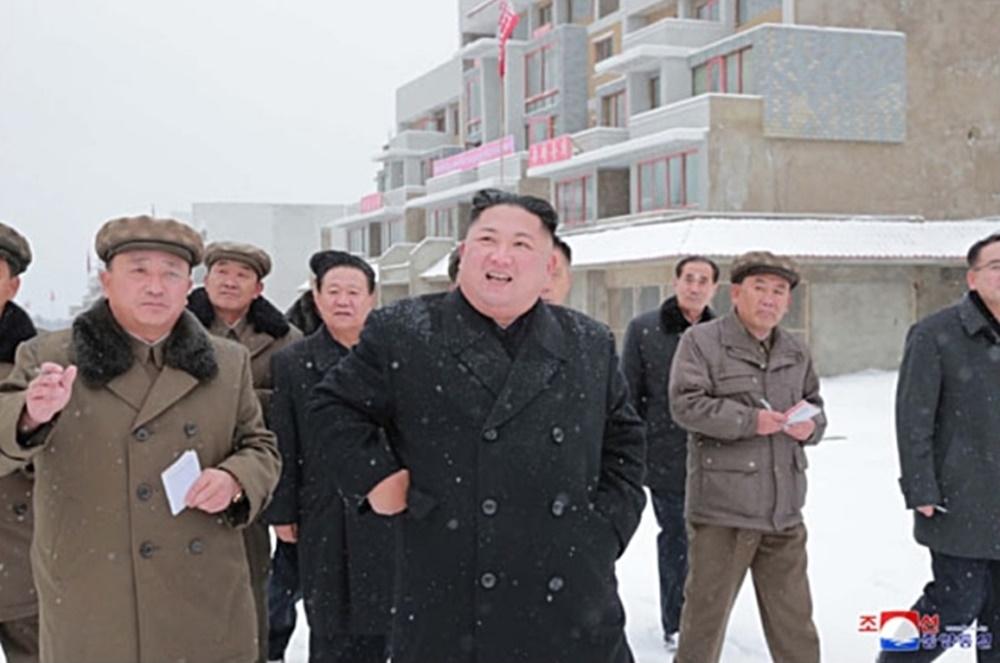 North Korean leader Kim Jong Un made his third on-the-spot visit to the Samjiyon modernization project site late last month. The site is now in the midst of a flurry of activity as the project end date has been brought forward to October 2020.

As temperatures fall below zero and construction continues from the early morning to late at night, there has been an increase in desertions of construction workers who are part of “shock troop brigades.” These desertions are largely due to the poor working conditions at construction sites in the area, North Korean sources told Daily NK on November 15.

Samjiyon, which is located on the slopes of Mt. Paektu, experiences temperatures that fall to minus 30 degrees Celsius. Snow began to fall in October and the ground is now frozen solid. Winds are fierce, leading to difficult conditions for construction workers. Despite these conditions, the 2.16 Division, which is managing construction projects in the area, has ordered that construction efforts continue at levels typical for the summer season.

“The factories and enterprises in the province have been providing many construction workers for the ‘shock troop brigades’ working on modernization projects,” said a source in North Hamgyong Province.

“These workers are constantly deserting their construction jobs, however, so the factory and enterprise Party officials have been dressed down by the provincial Party Committee and ordered to do something about the desertions.”

In North Korea, participation in shock troop brigades is considered a substitute for active military duty. The brigades are divided into two types: “regular brigades,” for those not heading to the military, and “irregular brigades,” which are made up of workers mobilized from nearby factories and enterprises. The desertions [i.e. those returning back to their regular jobs] are primarily occurring in irregular brigades.

“The factory Party Committees are asking workers mobilized to the sites not to leave their new construction jobs, and they are sending a lot of materials to help support the workers. But the workers end up finding the work too difficult and return back to their regular jobs,” a source in Ryanggang Province added.

Shock troop brigade members who desert their construction jobs bribe the bosses at their regular workplaces to avoid being punished, and ask that others be sent to the construction sites instead.

As a result, leaders of the shock troop brigades tasked with finishing the construction projects have ended up having to ask the provincial Party Committee to find a solution to the issue. The provincial Party Committee has reportedly responded by applying pressure on factories and enterprises to pay their workers to attend the construction sites.

“Poor, starving North Koreans in Hyesan, Pochon County, Huchang County and Kimjongsuk County, which are all relatively close to Samjiyon County, are [now] receiving 20 won a day or 200 kilograms of corn every second month for their work at construction sites,” said a separate source in Ryanggang Province.

In 2016, Open Radio North Korea published a report on forced labor by shock troop brigades in North Korea which quoted one defector saying, “I woke up at 5 am and worked until 10 pm, and if there were any battles [i.e. pushes to complete a project] I would even work until 12 am.” He also noted that he had to participate in various meetings including political study and criticism sessions when night-time work was not required.

Kwon Eun Kyoung, the secretary-general of the International Coalition to Stop Crimes against Humanity in North Korea (ICNK), told Daily NK, “We recently interviewed 10 victims of forced labor in North Korea to contribute to North Korea’s Universal Periodic Review (UPR), but the interviews demonstrate that there have been no changes since 2016 in construction site labor conditions, levels of work required, how incidents are responded to, or provision of food.”