According to a Daily NK source in China on Aug. 12, four 20 to 30-meter-long Chinese fishing boats “teamed up” to ram into the patrol boat near the Yalu River delta. “The [collision] threw seven North Korean sailors into the sea and several are still missing,” he added.

The patrol boat was affiliated with North Korea’s 52nd Fleet. The 52nd Fleet was once controlled by the country’s navy, but North Korean leader Kim Jong Un ordered the fleet’s command to be transferred to the Ministry of State Security’s Border Patrol Command in 2015. The fleet is reportedly in charge of patrolling waters in the West Sea.

According to the source, the collision was due to the “corrupt” transactions that have long occurred between North Korean patrol boats and Chinese fishing vessels.

Chinese vessels have paid the bribes with the thinking that it is better to pay a “fee” than to be forced to hand over their entire catch.

North Korean patrols have long used the bribes to line their own pockets and pay mandatory contributions to various “national projects.”

Their source of illegal income was disrupted when Chinese vessels vanished from the Yalu River after the outbreak of COVID-19 earlier this year. In short, North Korean patrol boats were unable to obtain any bribes from Chinese fishing boats for several months.

Chinese fishing vessels recently reappeared to conduct fishing activities in North Korean waters, but North Korean patrols have reportedly demanded that Chinese fishermen pay enormous sums of money to make up for their lost income over the past several months.

It is within this context that the recent collision incident took place, according to the source.

“Fed up with the unreasonable demands from the North Koreans, the Chinese ships joined forces and rammed the patrol boat,” the source told Daily NK. “The incident was serious enough that it led to ‘missing persons,’ but we are only hearing about it now because both sides sought to cover it up.”

According to the source, both sides have remained quiet about the episode because North Korea is embarrassed that a military vessel was capsized by the fishing boats, while China is worried that North Korea could officially raise an issue over Chinese fishermen engaging in illegal fishing activities in North Korean waters. 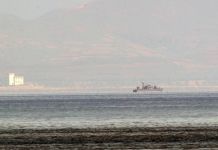