[imText1]On the 24th of this month, the DailyNK released photographs showing various scenes around Chongjin Station, taken from video clips by Lee Man Soo, a North Korean underground journalist. The DailyNK was the first among Korean media to post those pictures. Lee Man Soo is a laborer in his mid thirties, and began to reveal the realities of North Korea to the world in 2004 by stealthily shooting scenes of North Korea.

The DailyNK will publicize an exclusive series of articles in which pictures vividly depicting North Korean lifestyles are released. This second article of the series shows various scenes on a train between Chongjin and Hamhung.

Mr. Lee had to wait for a few days with his camera around Chongjin Station before he finally got on the train bound for Shinuiju. Several merchants, soldiers, and children with their mother caught his attention.

Up until the late 90s, the train had been the most popular form of public transportation, but people have avoided using it recently because of its unreliable schedule, and the frequent inspections by authorities. Rich merchants conduct business travel with use of a car or truck.

The reader will be able to see many solders in the pictures. It will be a good chance to feel what soldiers are like in North Korean society under the Kim Jong Il’s Military First Policy.

It is not uncommon to see soldiers threaten and beat civilians using their status in public places. Military policemen are often seen cracking down on those who have been involved in violence or theft.

※ The photographs are posted with the permission of the Asia Press.

● Scenes of the inside of the train

= Finally, the train from Chonjin to Sinuiju departs.

= It is a sleeping car. The man in blue is a soldier. He made a scene by claiming a bed because he was a sniper from the special forces. The train attendants (women in uniform) fearfully turned down his demand. To intervene in the dispute, the police officer (in the middle of the picture) showed up.

= A child with his mother is enjoying his rice. Most people are carrying their food because their journey is long, or because they do not know how long they will have to be on the train. Food sold in the train is too expensive for them to buy.

● Unscheduled stop between Chongjin and Hamhung

= Due to a power failure, the train made an unscheduled stop on the way to Hamhung. Mr. Lee shot the video to capture the pictures of the people around because the stop seemed to take a long while. In response to Mr. Lee’s question, the child said that he and his mother were on the way to a market to sell. It seems that his mother had something to take care of with the train authorities. The mother seemed to have told the kid to carefully watch the luggage because there were so many thieves.

= A stop before Hamhung station. They are selling eggs and kimchi to the people who got off from the train. An egg costs 50 won.

= The train stoped unexpectedly again right before Hamhung Station due to a power failure. This time it is in a tunnel where it had to halt. Passengers having spent the night in the train came out to wash their faces. Scenes of this kind are often seen during train travels.

= Two kotjebi are seen out the train window. They gather on every stop because some passengers hand out food to them and some throw out garbage. They search the garbage for leftovers.

= Hamhung Station is said to be much cleaner now than in the late 90s. Hamhung is the second largest city in North Korea so many people are seen in front of the station. The clock on the station shows it is 3 o’clock. We can hear from the video clip Grneral Kim Il Sung’s Song exactly when the clock strikes 3. In larger stations, the song plays every hour on the hour.

= Two train attendants are filling the container with water. Since the train is not equipped with water supply facilities, they take water like this whenever the train stops at a large station. The two in uniform are the train attendants. The woman at the left side of the picture is a volunteer, and man at the right is a soldier.

= Merchants are loading the train with their goods. In the 90s people took the train to find food, but these days they use it for carrying goods. The distribution of goods by the market economy among the grass roots is getting more and more extensive. Those with several pieces of baggage are large scale merchants.

= Military policemen with rifles are often seen patrolling around train stations or markets because of the recently increase in the number of crimes committed by soldiers.

= A soldier cuts in front of a man by saying that the People’s Army is first. The man in black is with the soldier, and his family members are also there although they are not pictured. We heard and saw from the original video clips that he hit the man wearing glasses and telling him to get out of his way. 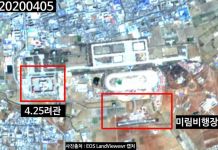 Corn prices in North Korea are surging as demand rises