Detention centers are reportedly filling up as the Ministry of State Security continues to conduct random arrests of illegal cell phone users near the Sino-North Korean border. A Daily NK source claimed that some of those arrested previously in North Hamgyong and Yanggang provinces have been publicly executed.

According to the source, Ministry of State Security personnel along the border are haphazardly arresting and detaining people using illegal mobile phones through non-stop crackdowns conducted 24 hours a day. The security agency’s officials are using stationary and mobile radio detectors as well as bugging and surveillance equipment to identify users of illegal cell phones.

Moreover, the agency’s officials are reportedly sweeping up not only those caught red-handed, but even locals who could “potentially” commit “illegal acts.” Security officials attempt to extract confessions with both promises of forgiveness in return for admissions, along with threats — issued after a few days in confinement — to, for example, “shave their heads and send them to correctional labor camps.”

North Korean authorities are also actively involving locals in their crackdown efforts. For example, they might promise an individual immediate release or allow them to receive food from outside the detention center if they confess that another person used a mobile phone to converse with someone outside of the country.

Accordingly, Ministry of State Security detention centers originally designed to hold up to six inmates are currently packed with over 20 people, said the source.

“The detention centers are so full that they hardly differ from rabbit hutches, with people seated right up to the toilet area,” the source said, adding, “The detained are losing hope as they cannot receive visits from their families.”

According to the source, North Korean authorities have already publicly tried and executed five persons who were arrested for using illegal mobile phones in Taehongdan County, Yanggang Province. In North Hamgyong Province, another five received public trials and were executed.

Though no one has been publicly executed in any of the other provinces on the Sino-North Korean border as of yet, 16 individuals in North Pyongan Province and six in Chagang Province have received public trials, said the source.

“Rather than having been caught recently, the publicly executed persons had been caught some time ago and were in detention centers,” said the source. “Because the Justice Department now stresses [the following of proper] procedures, even the Ministry of State Security follows procedure rather than rashly killing people because they’ve been caught.”

Graduates of Pyongyang’s Ryongsan National Security University, who have yet to be assigned to jobs, have been dispatched to Hyesan and Sinuiju to help in the mop-op operations. This has caused concern among people living in the border region. “Whatever we do, we mustn’t get caught since they’re going to catch and kill everyone,” the source said, quoting what he had heard. “We must prepare to die if we are caught.”

The source noted that “the graduates roam about without sleep, encouraged by the fact that their performance during these cleanup operations will determine if they get assigned to jobs they want.” He further reported that “[the graduates] are better than the local security personnel in sweeping up everyone because they have neither connections nor acquaintances with people who live along the border.”

In short, the Ryongsan National Security University graduates have no family or relatives along the border, nor or they indebted to the locals, so they have been focused on results by “viciously” catching those who commit “illegal acts.”

The source noted that “many more people would be caught” as it appears the mop-up operation will continue “until the primary work in constructing the bulletproof wall [concrete wall] and high-voltage lines is complete in late October.” 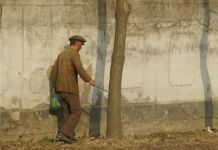